This weekend, Carol drove to San Antonio to spend some sister time and to participate in a sewing class at Grome’s with her sister Donna. While she was gone, I tended shop on the ranch.

My Friday morning chores included feeding the cows and burning trash. Tree trimming will come later in the day. First item on my list today is feed the cows.

The girls were waiting for me. A nylon mesh that is tightly wrapped around the hay has to be removed before the hay can be set into the feeder. While round is suspended, the mesh is cut loose. The mesh is then tied to the end of the chain so when the round is placed in the feeder, raising the bucket should pull the mesh off the round (photo 2). The girls were happy and are feasting.

We recycle plastic bottles, glass, steel and aluminum. Food scrap that did came from the ground is recycled in the pasture. The rest of household trash is burned. While I’m watching the burning trash, the girls are still feasting.

Carol made it to San Antonio after stopping in Giddings for an oil change. That only took two hours. Where is a Quick Lube when you need them. She and Donna spend Friday afternoon shopping for jeans to recycle for class. After a girl dinner, they crashed since they needed their rest for the class on Saturday.

Diane Lamb gave them an introduction on recycling sweatshirts. The idea is to start with a standard boring sweatshirt. Then embellish it by adding recycled jeans or any other discarded clothing item to it. Here are some examples of what the class produced.

When Carol finishes her sweatshirt, I’ll have her model it for the blog. Meanwhile feel free to leave a comment if you want Carol to contact you about this project.

After 4 hours of cutting, sewing and doing with sewers do when they get together, class was over and it was time for Carol to head back to the ranch. Other than a missed turn just outside of San Marcos, Carol’s trip was uneventful.

While Carol was sewing with her sister, I decided to do a little target practice. Knowing Carol and I are going to test for our CHL in February, practicing makes sense. My targets are a bit crude but they serve the purpose. The target on the left was 10 yards away and the target on the right was just shy of 20 yards away. Five single shots into each target (16″ x 20″). Looks like I did OK. 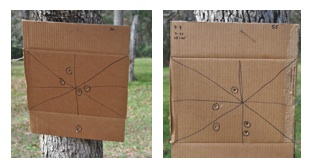 That’s it for our weekend on the Carl Wendler Ranch. 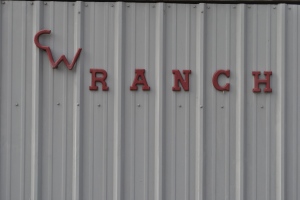 Thanks for stopping by. Y’all come back now.

This entry was posted in Texas and tagged CHL, sewing. Bookmark the permalink.

5 responses to “Our Weekend”