Friday Fun Foto – takes a twist today. The Daily Post is offering Photography101 course beginning Monday 3/2/15. Are you in? I am. Come join the Happiness Engineers for a fun time.

The next session of Blogging U. begins Monday, with Blogging 101 and Photography 101. Learn more about each course, see how Blogging U. works, and register!

Blogging 101 is three weeks of bite-size blogging tasks to kickstart a new or dormant blog. You’ll walk away with a stronger focus, several published posts, a handful of drafts, a theme that reflects your personality, a small (but growing!) audience, a grasp of blogging etiquette — and a bunch of new friends. Build blogging habits and connections to keep you going over the long haul!

Photography 101 helps you hone your photographer’s eye. This four-week, intro-level course is open to all, from new bloggers to hobbyist photographers to pro-shooters. Each weekday, we’ll give you a new photography theme and tip — we might share advice on composition, working with different light sources, or image editing — and the community…

I have agreed to participate in a 5 Day B&W Photo Challenge beginning Sunday March 1st. Fellow blogger The Happy Hugger has been doing this for the past few days. I’ve looked through my photographs from the past three years and selected a few that I believe will be suitable for this challenge.

The photos presented here did not make the final cut. Rather than let them remain in a dark electronic folder, I decided to give you a preview of what is to come. Feel free to re-blog this post or copy/paste this link (http://wp.me/p2BR7o-OI). 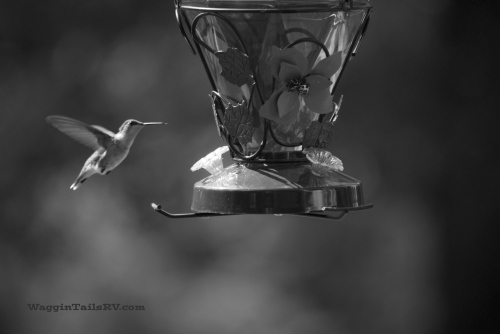 This photo was taken just outside our RV in July 2012 while we were workamping at Windy Valley Llamas in Blue Ridge, GA.

Carol and I were taking a drive through the country side near Monroe City, Missouri in June 2013 when we came upon this old building. It is amazing to see these old structures unoccupied, yet still standing tall and strong.

We workamped at Mark Twain Landing in Monroe City, MO from April through October 2013. This reflective symmetry photo is of the catch and release pond on the property. 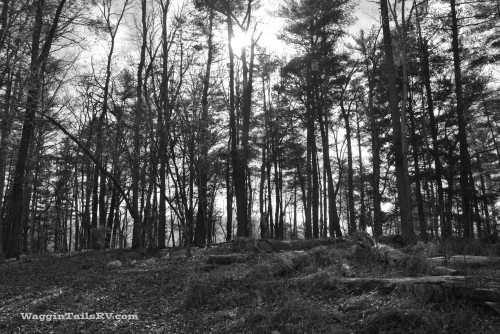 We workamped at Tremont Outdoor Resort in Townsend, TN from November thru December 2013. Cades Cove, on the southern end of the Great Smoky Mountains, has to be one of my favorite spots to explore. This shot was taken mid afternoon in November 2013 looking through the trees that provided a backdrop for the photo. The historic Missionary Baptist Church, built in 1915, is to the left of were I stood for this photo.

Another shot from Cades Cove – this well-preserved wagon has found its resting place in a cantilevered barn in the Cable Mill area.

Between Cades Cove and Townsend, we came upon this Great Blue Heron perched on this large rock in the middle of the West Prong of  Little River. He put on quiet a show for us.

We stumbled upon this old barn while taking a side trip from Townsend, TN to Blue Ridge, GA in December 2013. The barn is near Hiwassee Ocoee State Park in Delano, TN.

This Laughing Gull greeted us the last time we were in Corpus Christi, TX (Jan 2014). 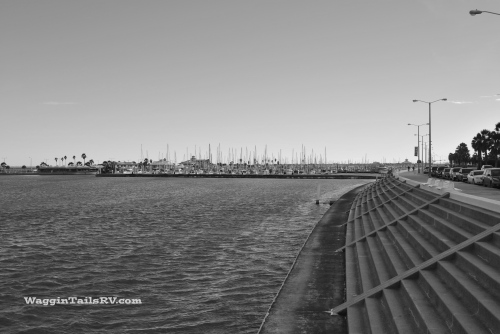 A parting shot along the sea wall looking towards the Corpus ChristiMarina is a final farewell to the town where we spent 20+ years prior to retiring. 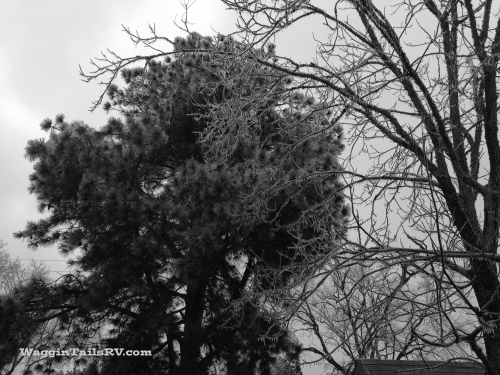 The tree on the right was covered with a thick layer of ice from a cold spell at Lone Star Yogi in Waller, TX. This is where we spent the summer 2014.

Shorty’s Saloon is a cute art piece that sits in front of an auto repair garage on I-40 in Amarillo, Texas. The fence behind the saloon is a standard 6 foot privacy fence.

This has been a fun project. I look forward to the start on Sunday, March 1st. Thanks for stopping by, y’all come back now.

This was my first wood shop. Not nearly as roomy as my last one but it was workable. Our 2 car garage also double as general storage. I had to pull the tools and projects out of the garage to work on them. Working outdoors in the sun was not fun, especially in the middle of summer in Texas. And rain meant no work, period. The little table saw was my first one. I’ll tell you about Sheba in my pet share on Tuesday 2/24.

The frog house was the first project I completed using finger joints. The gizmo (or jig) to the right side of the frog house frame is a box joint jig.  This allows the user to make very precise, evenly spaced cuts on the ends of the boards making the interlocking finger joint. This project required the fingers to be 1/4″ wide.

The fingers are a bit long by design. The protruding fingers are sanded smooth after the joint is glued. This technique is much quicker than attempting to cut the fingers to the exact length.

After sanding, the corners are perfectly aligned.

Next I cut a six-sided polygon (hexagon) and made support pieces so the hexagon would appear to float in the center of the box frame. 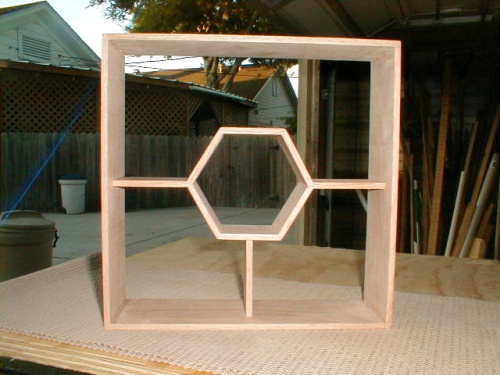 I intentionally omitted a top support so there would be a useful seat for a frog. The back is open so the small spaces inside the frog house would seem larger. I did not want the frogs to get upset because of crowding. At this point the frog house is complete and ready for the finish coat of polyurethane.

Here is the finished project, complete with frogs and a couple of bears. The frog house was made for a friend who worked with me in the Education Department at Driscoll Children’s Hospital in Corpus Christi.  Rebecca loved frog knick-knacks and had them scattered around her cubicle. I am glad I was able to make a home for her frogs and other critters.

I had a nice woodshop in our last house in Corpus Christi, TX. This was my ‘man cave’. It was nothing fancy but it was a place where Cody and I could go to get away and enjoy making sawdust.

My first real big project was this cool rocking cradle for my first grandson Gage. Here I am, in March 2004, celebrating completion of this project with a glass of Llano Shiraz.

In November 2004, I started working on a high chair for Gage. This was going to be his Christmas Present from Papa.

I started with a stack of Red Oak.

Which was transformed to this. 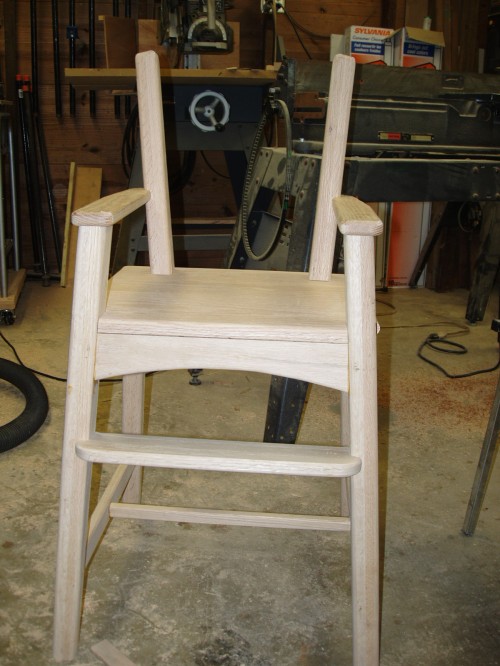 Then I took another stack of wood. 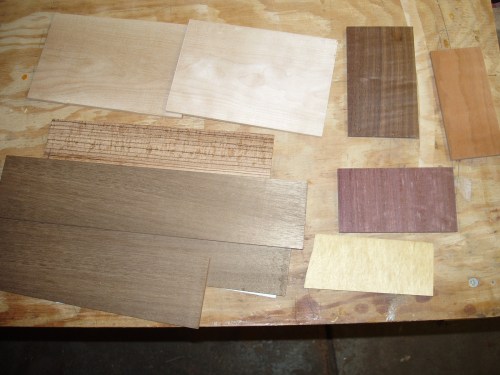 The species represented here included (from top left) Ash, then down to Zebra and Mahogany. Yellow Heart is in the bottom right, then up to Purple Heart, Cherry at the top right then left to Cocobola.

From this, I cut a bunch of smaller pieces.

These pieces then had to be put together to complete the intarsia puzzle.

And, while I was busy in my man cave,  G’Mee was busy in her sewing studio. This is a 3-D applique quilt she made for Gage.

Today I want to honor my maternal grandfather, Cleonis Collinette. We called him Coco. He lived in Rosée, Namur, Belgium, where he worked for years as a railroad conductor. I only met him face to face one time in 1954.

In the photo below (early 1960s), you see him working at his bench in the basement of his modest home in Rosée. He loved working with wood and was an excellent craftsman.

Growing up, I never had a change to build a relationship with him because he lived in Belgium while I lived in Texas. Distance did not stop him from making sure my brother and I knew him in some way. I have childhood memories of receiving special gifts from him. On his work bench, notice the item in the center. It looks like a windmill. He made this from a block of wood similar to a 4×4 post. The blades for the windmill were cut from pieces of aluminum. The blades were mounted on the end of a bicycle hub which he embedded in the wood block. The roof on the windmill was also hand cut from aluminum and marked to look like slate tile seen on many roofs of old buildings in Europe.

To the right of the windmill, is another project that looks like a wishing well. It was also cut from a block of wood, but this time instead of it being square it was round like a cylinder. The center of it was hollowed out. You can make out a handle that would turn raising and lowering a bucket. The roof was made similar to roof on the windmill.

All of the parts were hand made on his work bench. Gifts from a craftsman’s heart to his grandchildren.

When we retired and sold our house to buy our RV in 2011. We painfully parted with many special items. It was time for these two gifts from Coco to find a new home.  In the photo below, my oldest grandson Gage, on the left,  and my youngest grandson, Jayson, are holding their special gifts. They only know Coco, their great-great-grandfather, through these gifts and the photo above.

From my family to yours, we wish you a super Friday.